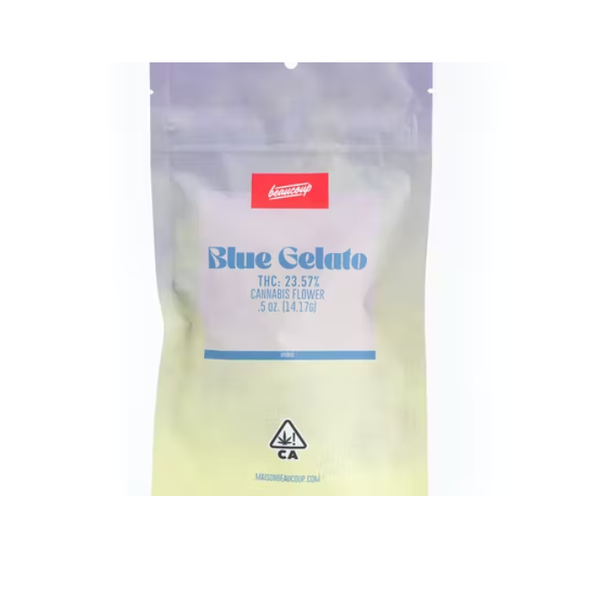 Beaucoup flower offers an effect-based cannabis experience. We source strains that provide 3 experiences: Energy is our always Sativa category. Vibe is our Hybrid, and Serenity is our Indica.

About this strain: Gelato

Gelato is a cross between Sunset Sherbet and Thin Mint Girl Scout Cookies, named in homage to its sweet aroma. Also known as Larry Bird, Gelato (#33) was first cultivated in Northern California's Bay Area and is derived from a deep bank of genetics created by the Cookie Family, the Sherbinskis family, and cultivator Mario Guzman. The cultivators parted ways following its creation, and the cultivator who possesses the most “stable version” of Gelato genetics is up for debate. Cookies cultivates a few phenotypes and descendants of the strain named Gelato #42, Dolce Gelato, and a sun-grown Gelato. Sherbinskis grows four stabilized Gelato phenotypes in its rotation as well: Gelato #41 (Bacio Gelato), Gelato #43 (Gello Gelato), Gelato #47 (Mochi Gelato), and Gelato #49 (Acai Berry Gelato). Per Sherbinskis, the #33 phenotype is no longer in cultivation.

Average Star Rating:
4.93 (27 reviews Total)
Have you tried this product?
Tell us something about it and help others make the right decision
Write a review
Show reviews with:
5 stars (26 reviews)
4 stars (0 reviews)
3 stars (1 review)
2 stars (0 reviews)
1 star (0 reviews)
Show all reviews
Martin Scott

Comment
"My good friend bought me a beaucoup of Gelato! I was so surprised I didn't have to go get it myself. It was a really thoughtful gift that really made my day."

Comment
"I'm a huge fan of Beaucoup's flower, their Gelato is one of my favorites! Gelato really makes it easy to find your perfect strain. Overall I would highly recommend checking out their products!"

Comment
"I have tried many different strains in the past and none of them compare to the Sativa, Energy experience that I feel from this strain. This is my go-to strain for a boost of mental clarity and energy."

Comment
"I got a sample of this flower and I am hooked on it! The effects are important to me, and this strain offers me just that. It is also very potent."

Comment
"Beaucoup is a great place to buy weed. It's reliable and the flower is always good quality. This particular strain is my favorite of all. Perfect body high, relaxing indica is what i need in my evenings."

Comment
"Beaucoup's flower is the best I have ever had. The effects are so balanced, and it lasts for hours. It never makes me feel drowsy or sleepy, but gives me a nice happy buzz that keeps me up for days."

Comment
"I had the best time last night. I was in a different city and met up with a friend at this place called 'Beaucoup'. I wasn't sure what to expect, but it was a really cool vibe. They had me try some of their flower for the first time, and it was amazing. The buds were sticky and dense, almost like honey. It made me feel really good man... just felt amazing."

Comment
"I am so happy I can finally find my favorite flower again! The quality is at least ten times better than other places I've purchased from. I would recommend this store to anyone!"

Comment
"As someone who suffers from anxiety, I appreciate that this strain leaves me feeling balanced and relaxed."

Comment
"I tried the Larry Bird by Beaucoup and I am really impressed. The flower is very high in THC and it has a nice flavor with a refreshing smell."

Previous
1 2 3
Next
Write a review