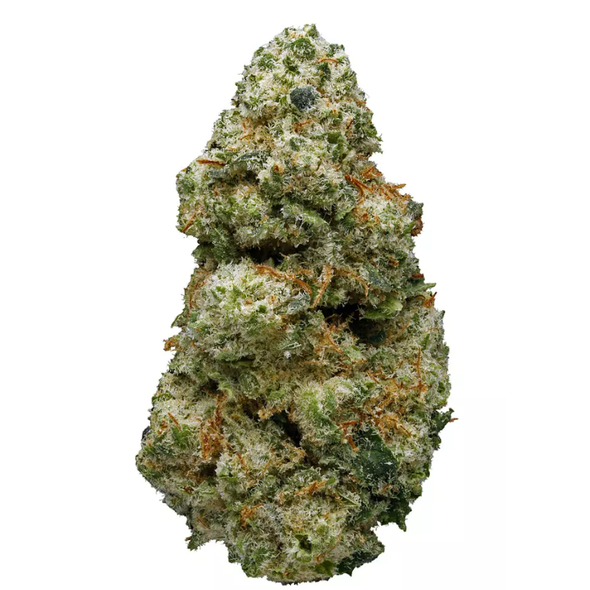 Alaskan Thunder Fuck (also referred to as ATF, Matanuska Thunder Fuck, or Matanuska Tundra) is a legendary Sativa marijuana strain originating in the Matanuska Valley area of Alaska. According to the legend, it was originally a Northern California Sativa crossed with a Russian ruderalis, but sometime in the late 70s, it was crossed with Afghani genetics to make it heartier. Alaskan Thunder Fuck usually presents large, beautifully frosted buds with incredibly strong odors of pine, lemon, menthol, and skunk. Known for possessing a relaxing yet intensely euphoric high, it is also described as having a “creeper” effect as well as pronounced appetite enhancement.

About this strain: Alaskan Thunder Fuck (ATF) was originally cultivated in Matanuska Valley, Alaska. Sources are conflicted about the genetic origin of this strain, but most seem to agree it began as a cross between Russian Ruderalls and an unknown type of Northern California Sativa, later to be crossed again with Afghani Landrace in the 1970s. The initial nose scent of this strain may be off-putting to some as its terpene profile is fairly unique. Mixing sweet fruitiness (banana and orange) with an earthy skunk (pine, diesel), this is a strain more suitable for a developed palate. Fans of Jack Herrer may enjoy the classic fresh lemony-pine notes of ATF. Because of its creativity-inducing effects, ATF is a great strain for those who wish to consume while still being able to concentrate. Too, many say this strain lacks the typical crash that comes with a potent sativa. Since ATF is known for its intensely cerebral head high, those prone to sensitivity may want to take a conservative first puff or two and see how it affects them. Fun fact: this strain shares the name of a popular drag queen known for her high-energy performances.